Our final country we explored this half term was Australia and did we finish with a bang! We started off by looking at where Australia was on the map and looking at how much closer it was to the equator than us. We talked about the capital being Canberra and not Sydney. We discussed in detail the different climates and seasons - we're in winter and they are in their summer.

We then went on to look at Barnaby's holiday to Australia - he was a very busy bear! He went skiing, surfing, snorkelling and even went to the jungle! From this the children wrote their own newspaper report of Barnaby's adventures. We were so impressed that the children wrote in the past tense and included conjunctions and adjectives into their writing.

The children had a very exciting performance from Mrs Carter and her didgeridoo. She had practised her circular breathing ready for her big show! We were all very impressed - well done, Mrs Carter!

We are so impressed with how the children have coped coming back into school after such a long time. We have been amazed with the children's progress and how much they have grown in independence.

We want to say a huge thank you for all the support over the term and the generous gifts we have received this week. We hope you all have a safe and happy Christmas with your families, and we look forward to welcoming you back on Wednesday 6th January. 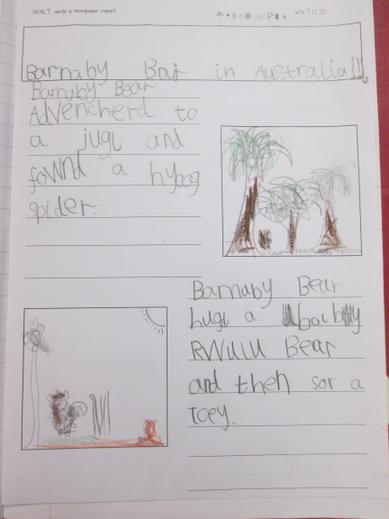 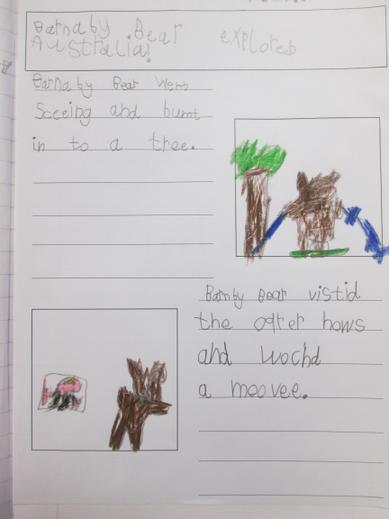 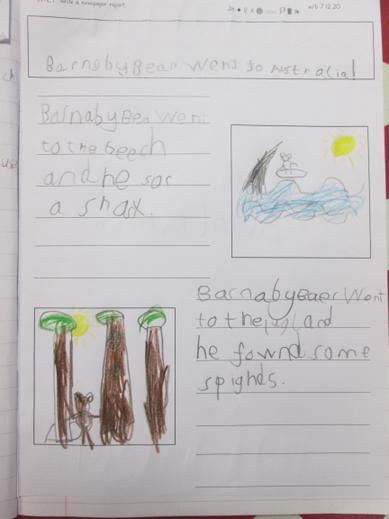 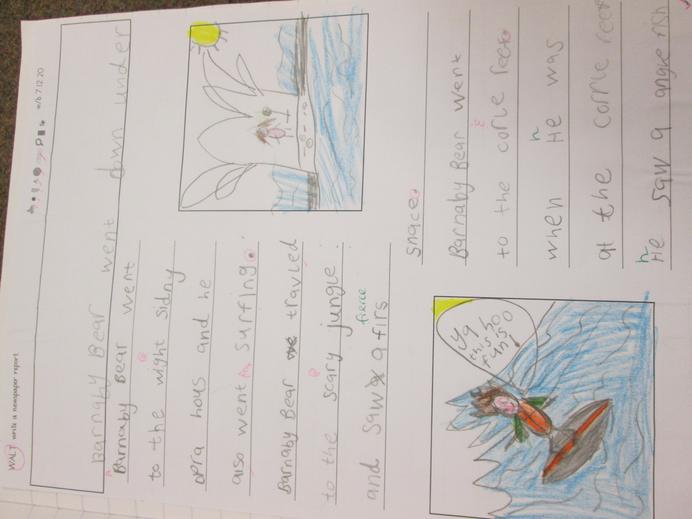 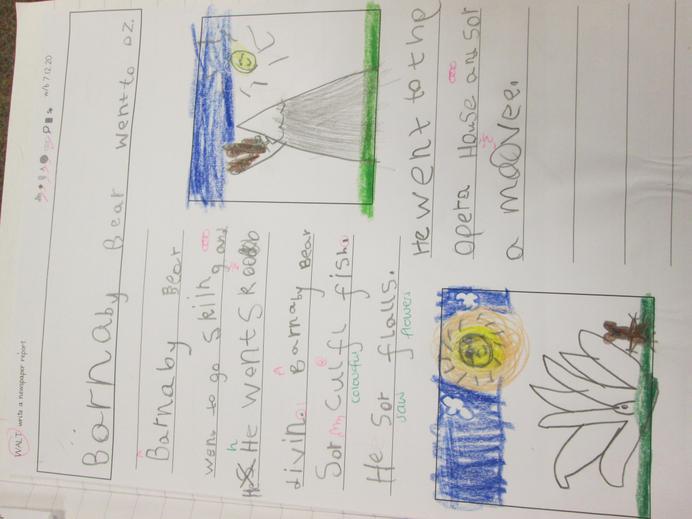 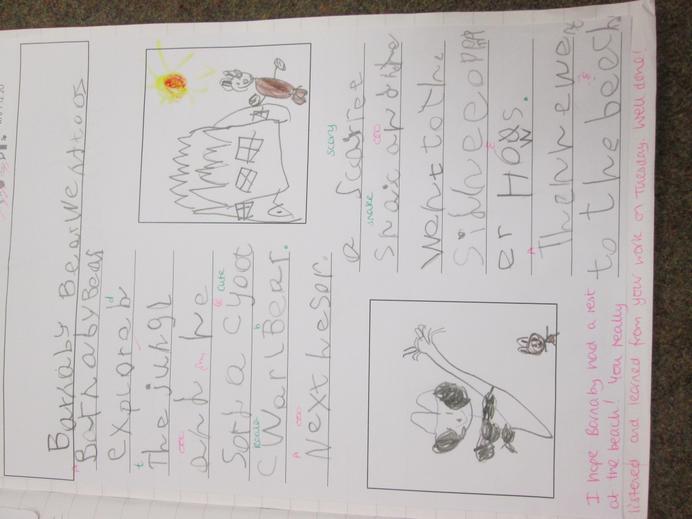 What a Busy Week!!

We started the week with an explosion (of glitter)! The children were incredibly excited to show off their clothes, hats and other Christmas items! They enjoyed being with different children throughout the morning.

The children made a variety of Christmas decorations, such as snowflakes, candy canes, stockings, stars, reindeers, trees and baubles! They were really engaged and wanted to complete all of the activities. The children sung Christmas songs and talked about the elves arriving as well as opening their advent calendars. We all had such a lovely morning! In the afternoon, the children decorated the big Christmas tree in the hall before we practised singing our Christmas song for the KS1 performance.

From one exciting day to another!

We are following Barnaby Bear around the world and this week we are focusing on Italy. We began by talking about personal hygiene and how to prepare food before we use it. We made these pizzas as a whole class. The children had to listen very carefully to the instructions on how to make them: first roll out the dough; then spread the sauce. Next sprinkle the cheese and finally add the toppings. We were both very impressed with how well they listened. They were so excited that they had made their own pizza!

In English we looked at a different set of instructions and learnt that we needed time conjunctions and imperative verbs. From making our pizzas, the children then practised writing their own instructions on how to make them.

In maths we have been looking at place value. The children have been partitioning numbers from 10 to 20 into tens and ones. For example, 19 is made up of 1 stick of 10 and 9 ones. The children practised using numicon and then dienes to support them. 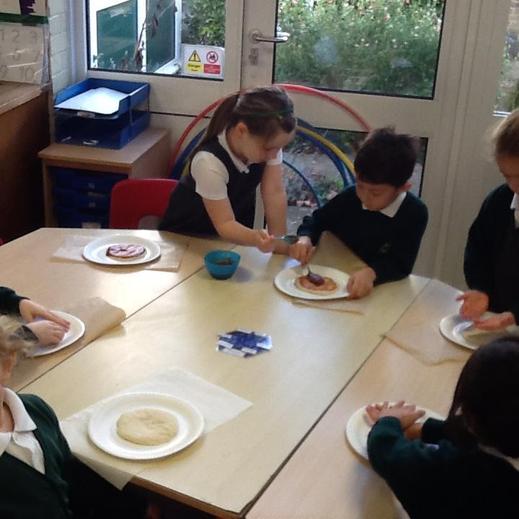 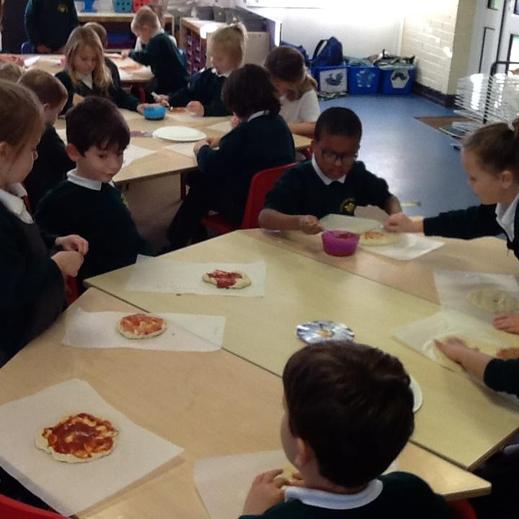 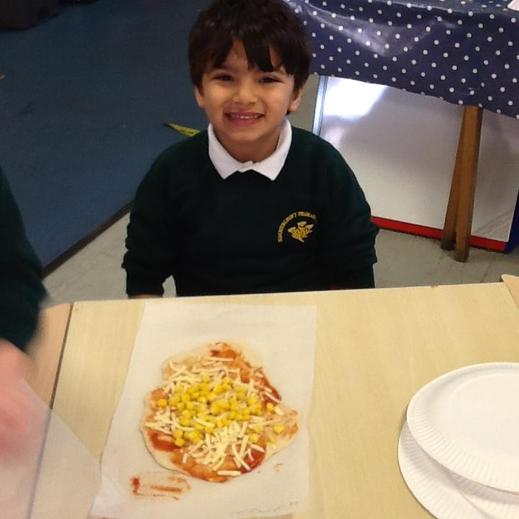 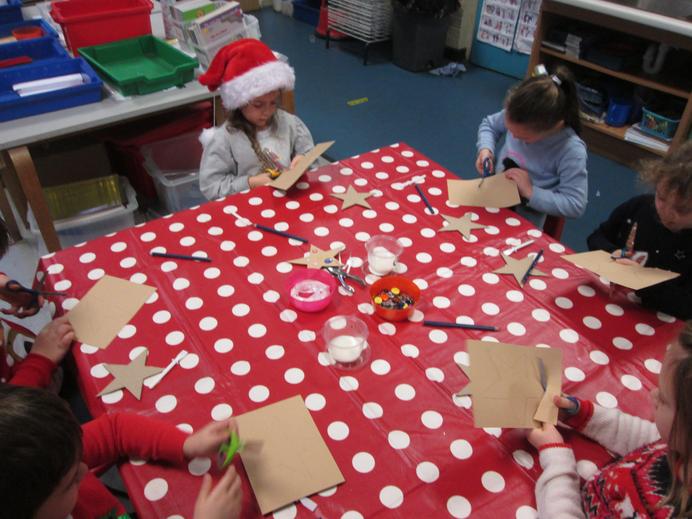 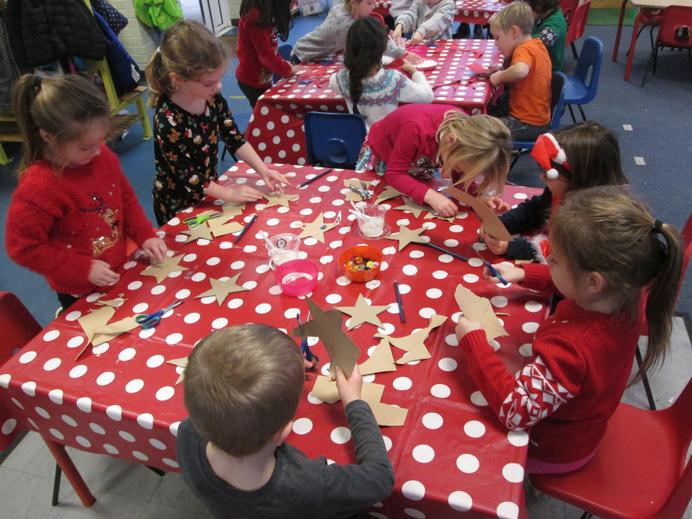 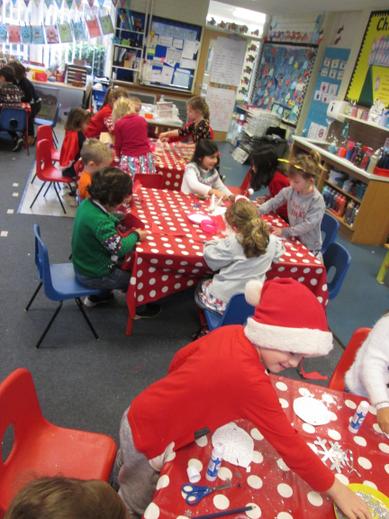 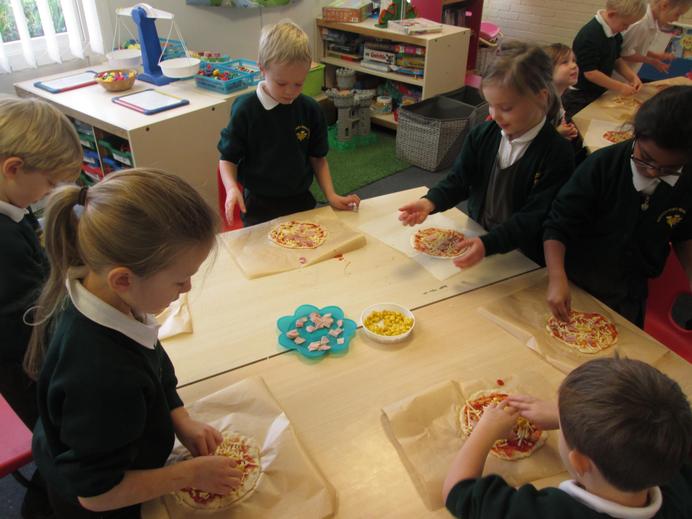 We had an exciting first week back after half term with Arts Week! Our theme this year was Harvest Festival.

We started off the week by understanding what harvest festival is about. The children were able to explain that we need to be thankful for our grains, fruit and vegetables. As a class we created a mind map of words to describe what harvest festival meant to us. From this, the children wrote their own acrostic poem for the word ‘harvest’. We were very impressed with the children's writing!

We were given corn as our vegetable to focus on during the week. The children began by painting bubble wrap to use as a stamp for their corn. They then scrunched green tissue paper for the leaves.

As a school we researched about Guiseppe Arcimboldo. We learnt that he was an Italian artist who was born a long time ago. He used fruits and vegetables to create faces. The children took inspiration from him and created their own faces. It was amazing to see how enthusiastic the children were!

In music we learnt the song 'Big Red Combine Harvester', with actions, which the children performed in groups outside. This was videoed and was shared across the school.

To finish our week, we explored signs of autumn outside and collected leaves to create our very own wreaths - which look amazing! 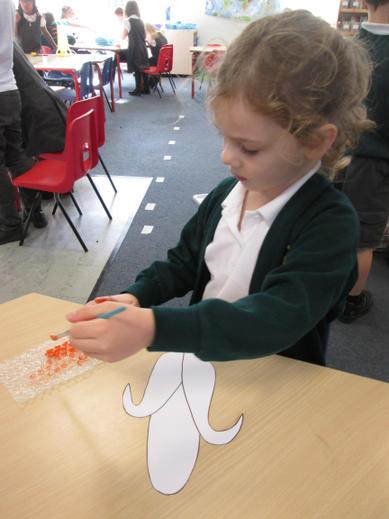 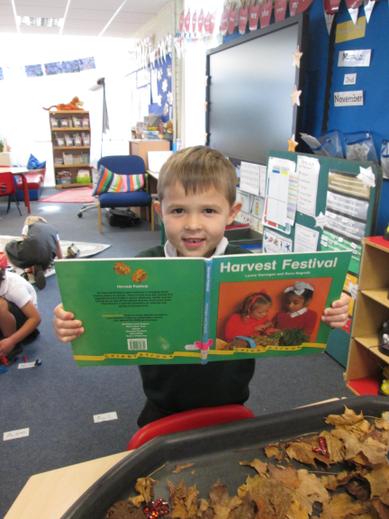 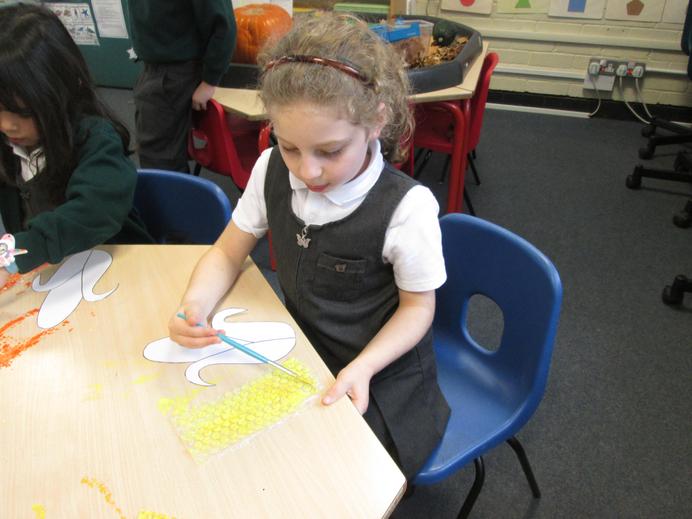 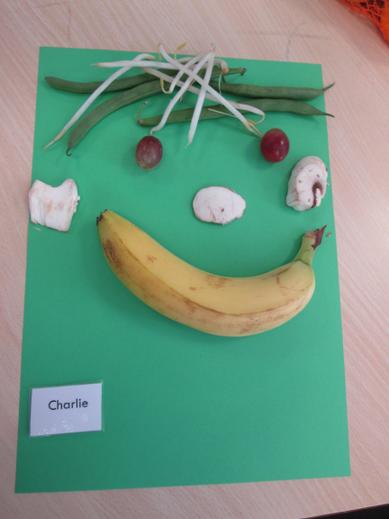 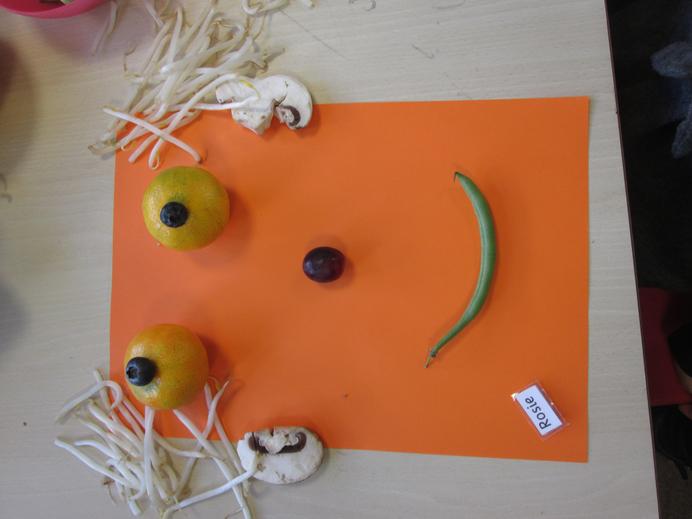 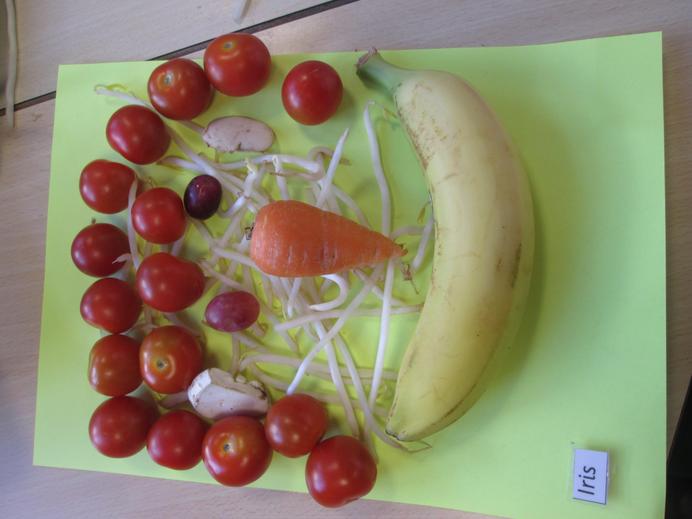 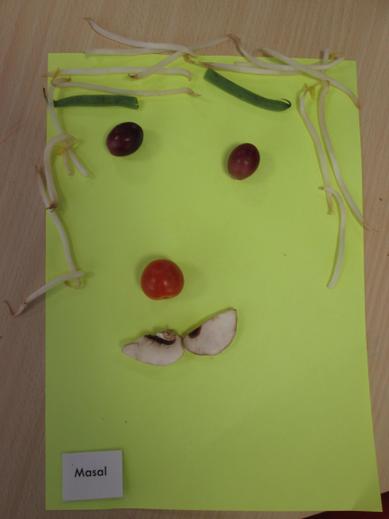 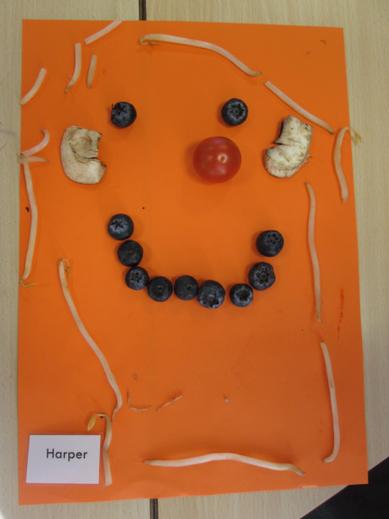 Spirit of the Wild!

Wow – what a way to end the half term!

Last Friday the children had a visit from Ben and Hannah from Spirit of the Wild. Ben began by talking about the different animal groups – birds, insects, amphibians, fish, reptiles, and mammals.

We started with the birds. First up was Luna the barn own, we watched her fly from one side of the room to the other – it was amazing! We then were treated to the sight of the extremely rare golden eagle, which was a true highlight for many of the children. Finally, we had Flinty, a parakeet from the Amazon rainforest.

Next up were the insects. We had a cockroach and a millipede, which the children were able to touch. We learnt that the millipede has its bones on the outside, an exoskeleton. Finally, we had a huge spider called Phoebe – it was very gentle!

Onto the amphibians: we started off with an African bullfrog which is the second largest frog. The children described the frog as very wet and slimy! The children then saw a toad which we found out had poison in his shoulders to protect himself.

The reptiles were next! We had two different tortoises: Turbo and Jett! (Perfect names!) Turbo was from the Amazon and Jett was from Greece. We then had a race between the two – we could have been there for hours! Finally, we saw a gecko called Dude which all the children got to stroke; he was very soft!

Our final group, mammals. We met the only mammal that can fly – a fruit bat. A couple of children got to feed the fruit bat. She did spit out the skin and seeds of the fruit as her stomach cannot digest them – the children liked this part! To end the mammal section, we met a meerkat. We had to listen carefully to hear her calling and all the children were able to stroke her.

Ben brought out the final animal – a snake! They loved it! She was a very friendly snake and all the children got to stroke her – she felt very hard!

We were so impressed with the children’s listening and behaviour – we couldn’t fault it! It was amazing to see how excited the children were to tell you all about their day. We would like to say thank you for your donations towards this visit and a special thank you to those parents who donated extra to avoid it being cancelled. We really appreciate it.

We hope you have a happy and safe half term! 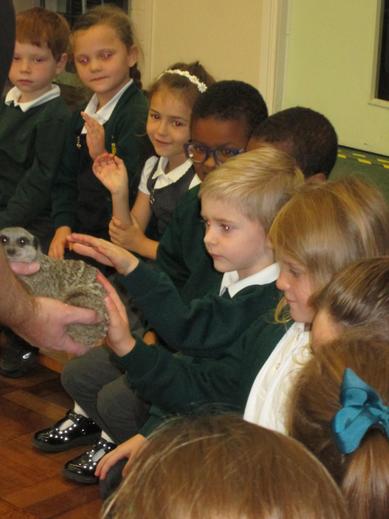 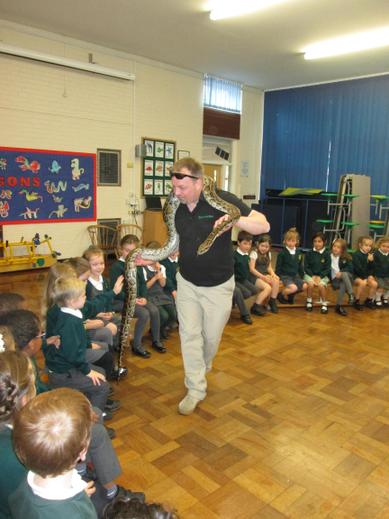 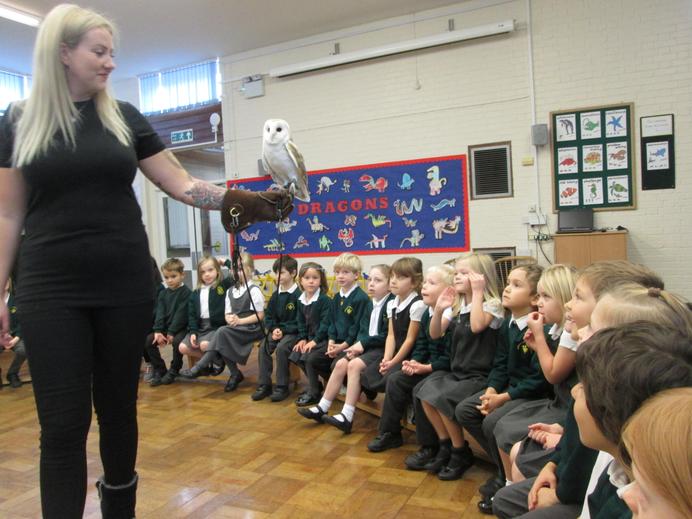 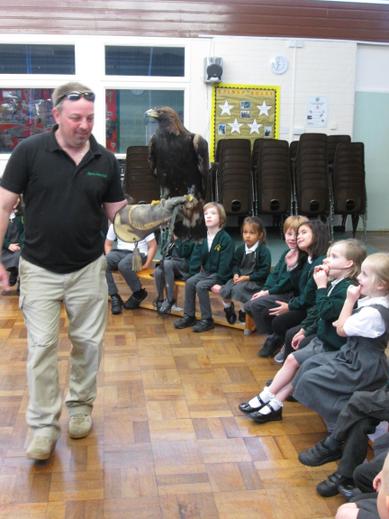 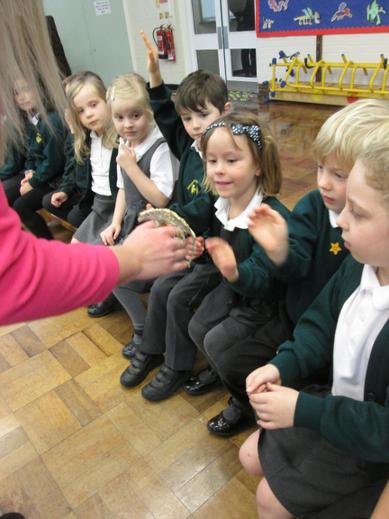 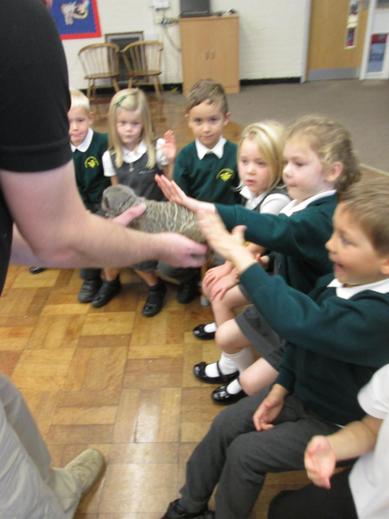 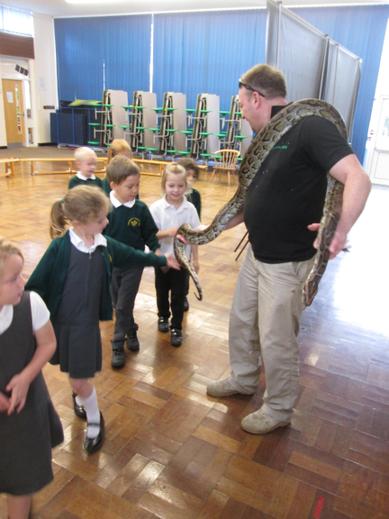 What The Rainbow Fish Did Next...

Continuing with our Rainbow Fish topic, the children have been writing a short structured story. We started off by talking about the beginning, middle and end. The children sequenced pictures of the story, then wrote a sentence to describe that picture. They had to make sure that their sentences had capital letters, finger spaces, full stops and adjectives!

The children have been enjoying their funky finger sessions in the morning, which has improved their fine motor skills. We have been focusing on letter formation and using scissors correctly and accurately, as well as daily movement exercises.

In DT, the children have created their own CD fish - which they love! They began by choosing their own lips, tails and fins, then attached them to a CD using glue. To finish off, they covered their CD in gems - we have never seen them so excited! All you could hear was 'wow'!

In art, the children have been creating an under-the-sea collage. They began by covering their paper in blue tissue paper. Next they scrunched yellow tissue paper to create the sand and finally they twisted green tissue paper for the seaweed. To finish off, the children decorated and cut sea creatures to complete their masterpiece!

In computing, the children have been learning how to handle a mouse and log into Purple Mash. They have been decorating a fish using our classroom computers. We have been really impressed with how well they have used them, and their creativity!

This half-term our topic is Rainbow Fish. We began by reading the story, watching an animated clip and creating a story map to retell the story. We looked at what an adjective is and used this vocabulary to describe the Rainbow Fish. We had words such as proud, colourful, beautiful and dazzling.

To continue our Rainbow Fish theme, the children have been using music and movement to portray the characters and story line. They have used their imagination and creativity to think of movements for the Rainbow Fish, seaweed, little blue fish and starfish.

In science we looked at a structure of a fish and the children labelled the different parts. We compared the differences and similarities between fish and humans.

In maths we have been looking at numbers to ten and finding different ways to represent them. The children used numicon, counters, number fans and anything else that they could find!

We are excited by the activities planned for the next few weeks.

What a lovely start we have had to the year! It has been great meeting all of the children and getting to know them. We spent the first two days establishing rules, routines and Year 1 expectations. The children spent time getting to know each other again and exploring the Year 1 toys. They have loved playing in the Wendy house, with the dinosaurs and the mud kitchen!!

This week we have been listening to each child read to prepare for guided reading to start in a couple of weeks. The children have been writing postcards about what they did over the summer holidays. We were really impressed with the capital letters, finger spaces and full stops. In maths we have been counting, ordering and writing numbers to 10.

We have been amazed at how well the children have settled back into school and are very familiar with washing their hands!!

We cannot wait for the year ahead!