It’s dangerous times in Year 5 as we have started this term with our topic of ‘Natural Disasters’! Volcanoes have been the focus of our first two weeks, resulting in some fabulous paintings and 3D mod-roc models as well as some fantastic technical language learned. The mod-roc was particularly messy but combined with a plastic cup, masking tape and plenty of newspaper, created the types of models you can see in the pictures. We used bicarbonate of soda and vinegar to create a volcanic eruption, resulting in some bubbly volcanoes and stinky classrooms!

In maths, we have been battling with the challenging concept of decimals and then converting them into fractions and back. It’s been amazing seeing the children push themselves to learn, with many reaching the higher challenges by the end of the unit.

The Wolves in the Walls by Neil Gaiman has given us lots of inspiration in English and has helped us to learn how to effectively use coordinating conjunctions and different sentence types to improve our writing. Hold on tight—next week we are moving onto hurricanes! 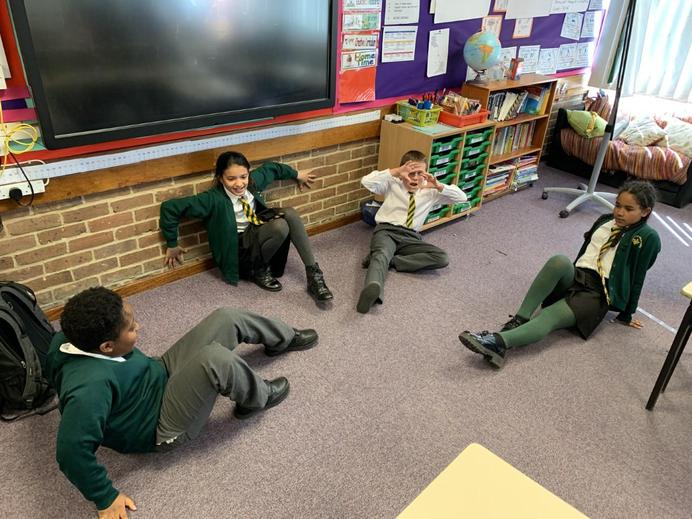 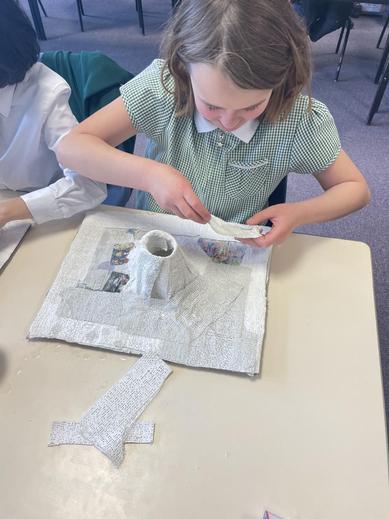 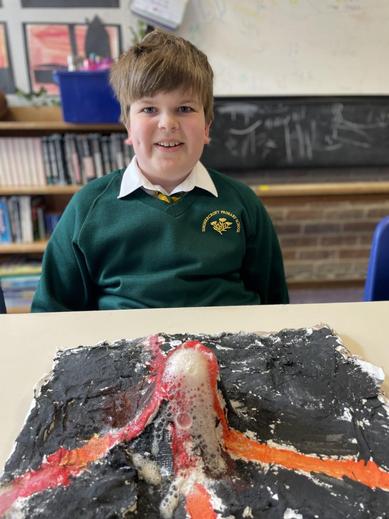 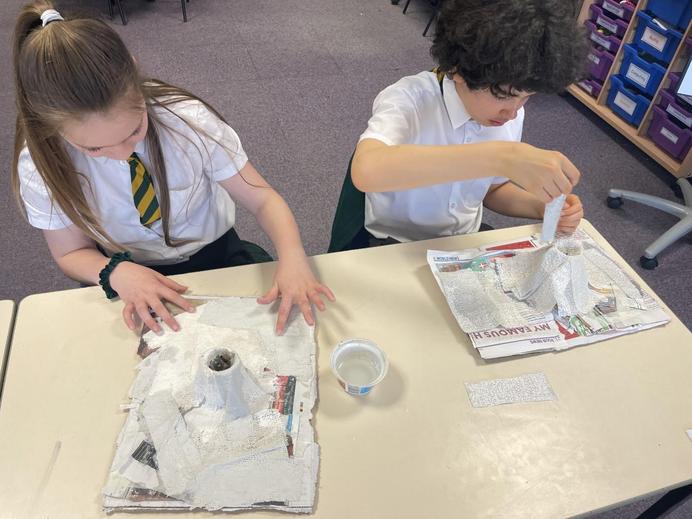 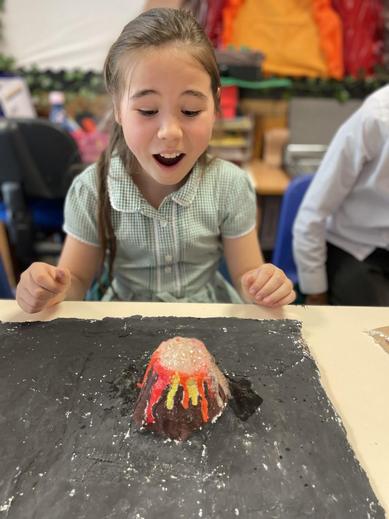 Year 5 have absolutely blown us away since returning to school. We have always been incredibly proud of the children, but their response to home learning during lockdown, and their attitude to learning since our return to school has been so mature; we're bursting with pride!

This half term we have been learning about the events of World War II. We returned to school only to be 'evacuated' during a blackout, having heard the announcement from Neville Chamberlain that war had been declared. We learnt about The Holocaust, The Blitz, the Battle of Dunkirk, rationing and evacuation. The children have thoroughly enjoyed this topic; we wish we had more time to cover more of these historic events!

Last week we created gas mask boxes using tea-stained card and recreated a monument in Budapest called 'the Shoes on the Danube Bank'. After learning about the harrowing events that took place there, we discussed the items in our classroom that make this place our own. The children were asked to consider what would be left behind that represented us, should we be asked to leave without notice. Then we placed their items in the middle of the classroom. This was an incredibly moving session and helped the children to consider how those victims may have felt in that moment. We have also enjoyed lots of WWII themed arts and crafts over the past few weeks and put together this beautiful display of Blitz inspired paintings.

During our English lessons we have used Anne Frank's diary as a model for our own lockdown life diary entries, during which the children focused on their inner monologue and feelings during their time at home. In maths we have continued to build on and consolidate our fractions knowledge, with a variety of small group sessions, extended early morning maths and lots of problem solving.

We wish you all a restful Easter break and look forward to a full term back together for the summer! 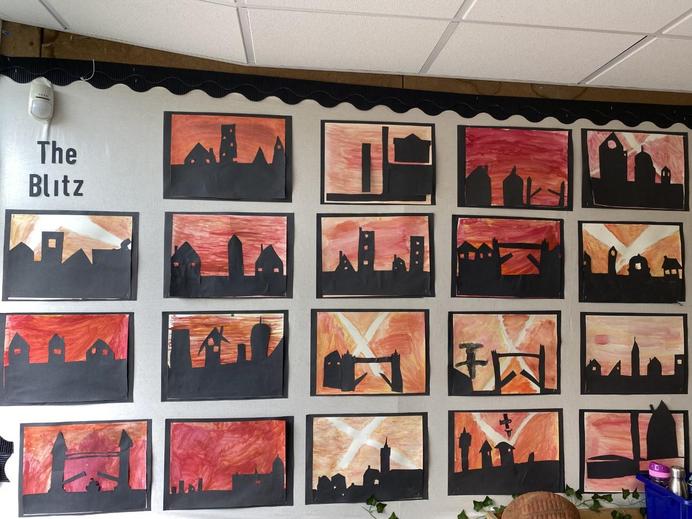 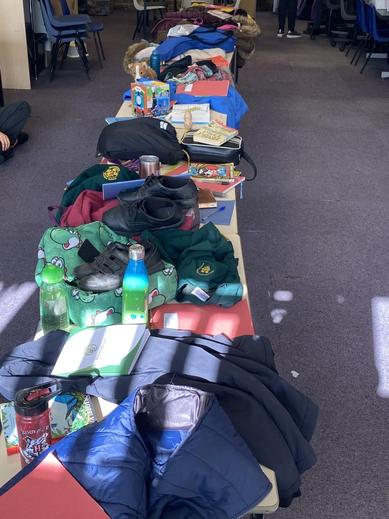 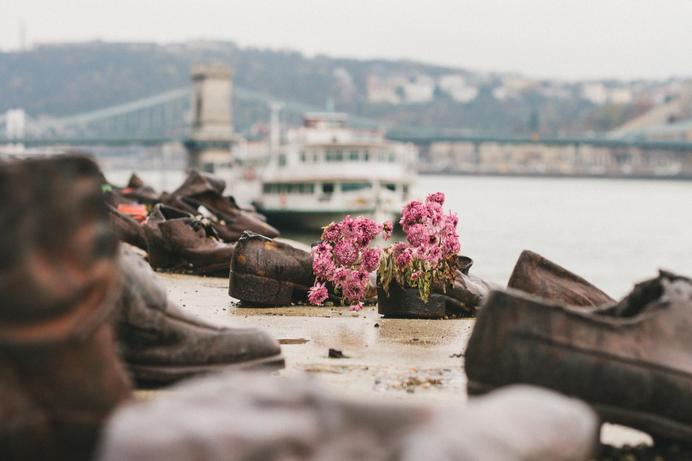 We've now reached the end of our first term together in Year 5, and what an amazing term it has been!

We 'hooked' into our topic just after half term with origami boats made from paper, which the children didn't know was waterproof! We had such fun predicting the demise of the boats, only to discover that they floated beautifully. There have been so many successes throughout our Rivers topic, including investigations and write-ups of the water cycle in science. In writing, we saw beautiful written descriptions of rivers settings from the children, and fantastic rivers blogs which we have created on the new Chrome books! Throughout there has been lots of cross-curricular topic and English work, through which we have developed a wonderful understanding of the journey and the uses of rivers.

Now to end our topic we have created more boats but this time from lolly sticks, and what a feat of engineering that was! We soaked our sticks to help them bend, dried them inside cups to round them, then cut them to shape before assembling. Sycamore class's boats are a lot closer to our original design, Hazel class's are definitely not! However, everybody made a fantastic vessel and we are so proud of all of the children's efforts.  We wish you all a wonderful Christmas. 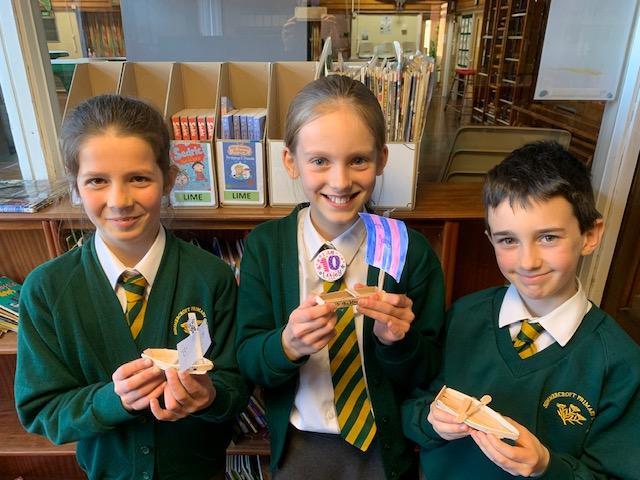 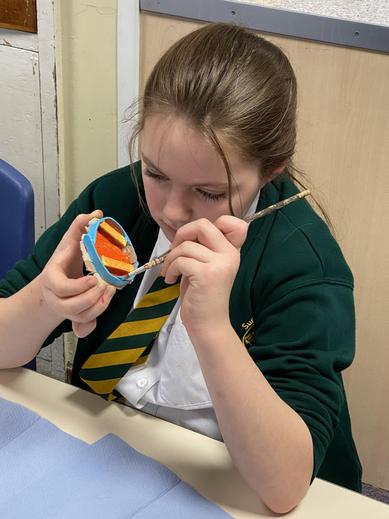 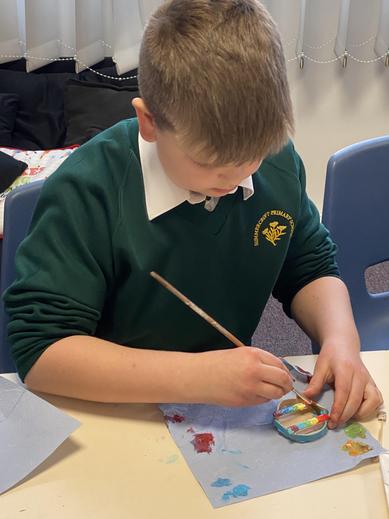 Science has been high on the agenda in Year 5 over the past few weeks, as we delve deeper into our Rivers topic! We have learnt so much about the water cycle and created diagrams, leaflets and even an explanation text, all about water and its journey. As part of our learning, we created a 'rain cloud in a jar' using shaving foam and food colouring. We were all totally mesmerized as we watched the 'rain' saturate the cloud and then 'precipitate' inside the jar. Next, we discovered how materials have different properties which make them either soluble or insoluble. We experimented with a variety of materials to see whether they would dissolve or not. We discovered that water has a saturation point, the stage at which no more of a substance can be absorbed. We tested this with salt and were amazed to see the salt sit at the bottom of the glass! Lastly, we did the reverse and investigated the separating of materials. We were given a selection of materials which were mixed together, we made sensible predictions as to whether we could separate them and what we would need to use in order to achieve separation, then we tested to see if we were correct. 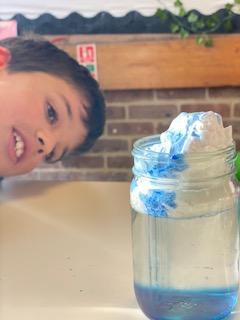 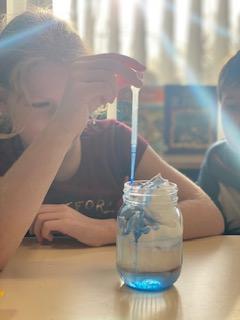 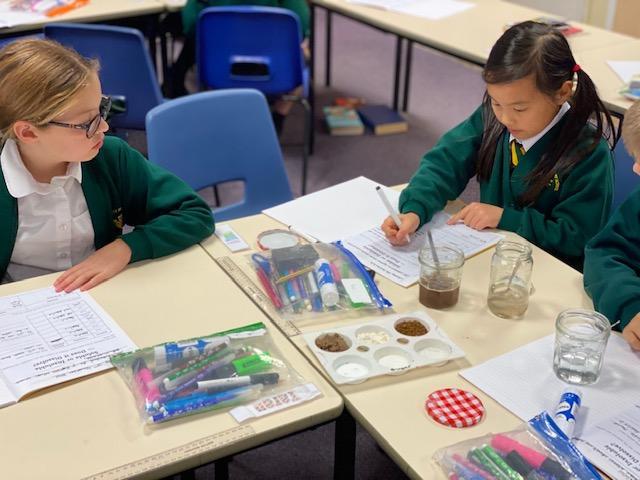 Year 5 have had a wonderfully crafty time for Harvest Arts Week. The week began with some foraging around the school grounds! We joined in with the whole school study of the artist Guiseppe Archimboldo and his use of natural resources. Gathering leaves, twigs, acorns, and other wonderful treasures, we then took them back to the classroom and used them to create a self-portrait. The following day we all (children and teachers!) learnt how to plait corn to make corn dollies, which were traditionally used in Pagan ceremonies to thank Mother Earth for the harvest. During our English lessons we each created a Harvest Haiku, which were then put together and recorded to make a whole-class poem for a whole-school virtual celebration. Foodbanks also featured heavily during our English lessons, as we read the story 'The No Money Day' and wrote persuasive letters to Tesco Head Office, to encourage them to donate the produce that they waste. We ended the week with some messy fun, each of us getting stuck in with some salt dough which we shaped into beautiful pumpkins. Despite not being able to celebrate this wonderful time of year with a Harvest Festival, we enjoyed lots of crafts in the classroom and ending the week by watching each class' videos of a harvest performance. 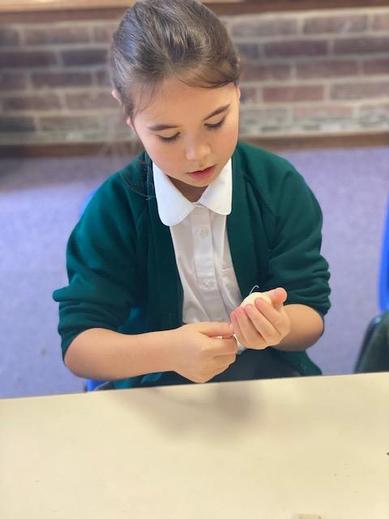 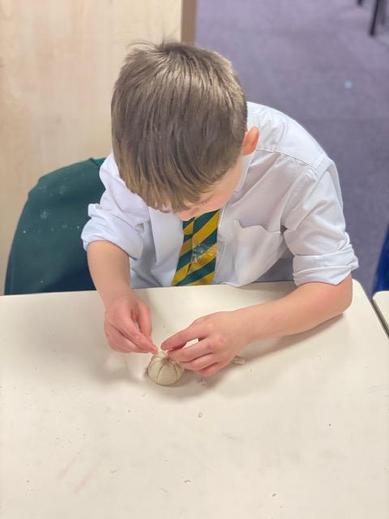 As we approach the end of our first half term, the children have been working hard to finish their map project, which includes countries of South America. These maps are different from your average atlas, as you can find information regarding the food of a region, the popular sports, some of the landmarks and much more! The children have coupled their in-depth research with fantastic artistic flair to create the final masterpiece. The presentations about these countries will be winging their way to you shortly, so keep an eye out! Sewing has also made up part of our timetable the past week, with shirts for aliens being created! We were limited in the amount of fabric available, but luckily for us these aliens are particularly small! Running stitch was the most popular technique across both classes as the children's fabulous designs were brought to life. 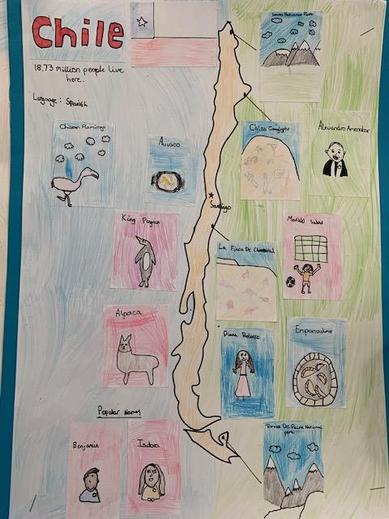 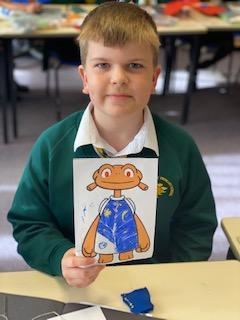 Year 5 have finally returned to earth, touching down in South America. Using their atlases and Google Earth, the children named all the continents and oceans of the world on the way down before plotting them out on a blank map. They then got to work naming the countries of South America as well as using their newfound map reading skills to include the capital cities. The children have also been working hard to emulate the painting skills of Vincent Van Gogh and have now finished their paintings using his style. The results are very impressive and it's clear to see we have some budding young artists in this year! Science has played a big role in both our space topic and with our English writing, with the children also completing their reports on the alien planet, Pandora! Once again, the Year 5 adults are so proud of the effort the children are putting into sticking to our new routines, whilst also creating such fantastic pieces of work. 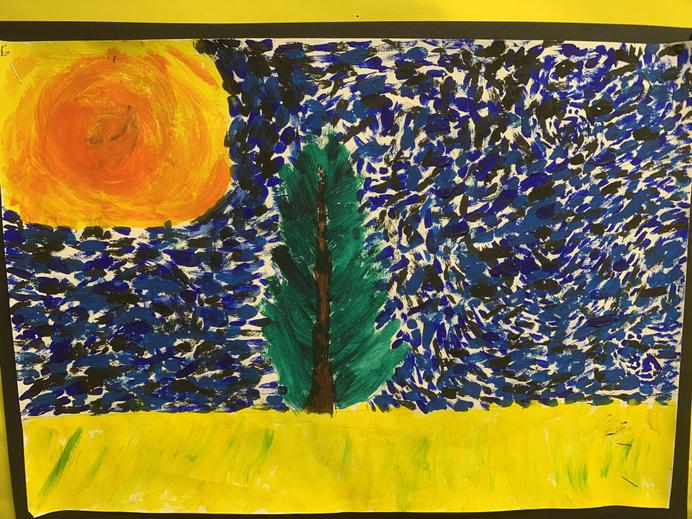 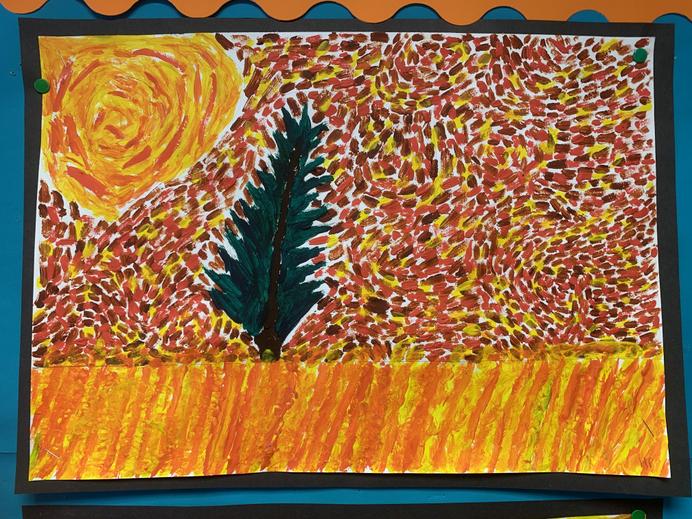 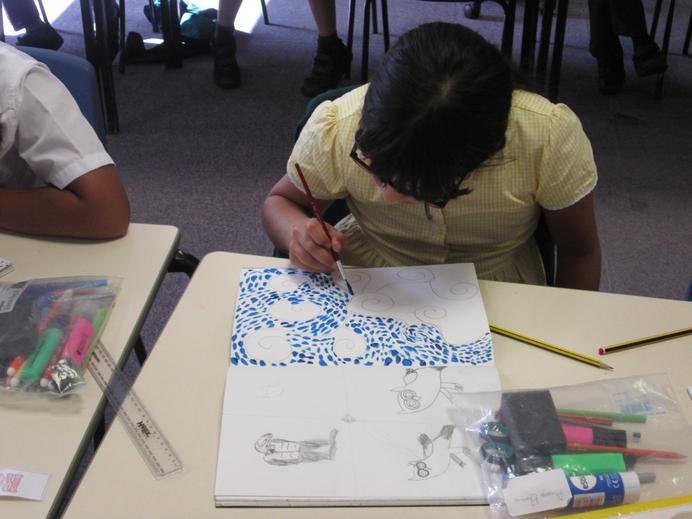 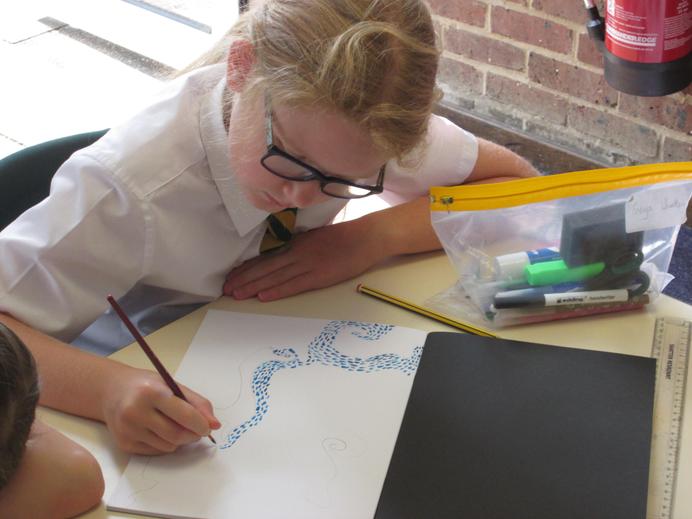 Reach For the Stars

Year 5 have continued to ‘reach for the stars’ as they continue to study the Earth, Sun and Moon. We have enjoyed some amazing, hands-on activities including making moons from clay then dropping marbles on them to create craters, and dissecting oreo biscuits to represent each of the phases of the moon! We set the children a challenge in PSHCE with some teambuilding and problem solving, by attempting to create the tallest tower using marshmallows and spaghetti. Year 5 have also continued with their Van Gogh inspired art, using acrylic paint and a method called ‘impasto’, which involves layering on thick paint in lines. The children continue to impress us with their hard work and dedication. Thank you, Year 5!

The year has started with a bang in Year 5 as we blasted off into space to look at how the planets and stars compare with each other. The children drew in chalk on the playground to demonstrate how large they thought the Earth, sun and moon were comparatively and then were blown away when the true size of the sun was demonstrated to them. We also studied how the moon got its craters (as pictured below) by using marbles and clay to re-enact meteorite impacts. It has been amazing to see how quickly the children have settled back into the school routine after so long away. After our initial lessons about how to be mindful in maths, they are ready to learn and take risks. We were also reminded that mistakes are a natural and important part of the learning process. The children have shown remarkable adaptability to the new COVID-19 measures that have been put in place to keep them safe. We thank you for your continued encouragement and support with this at home. 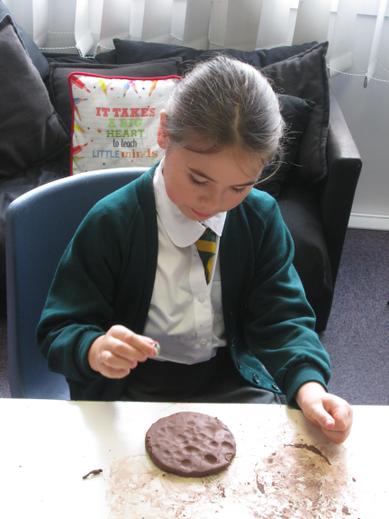 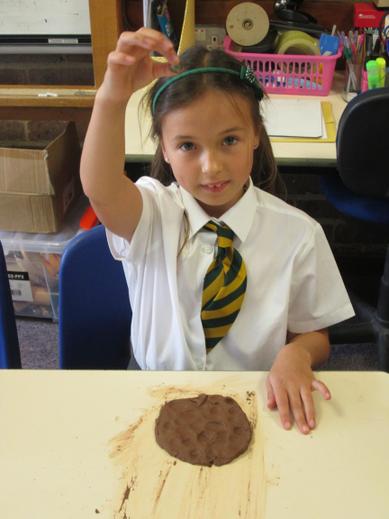 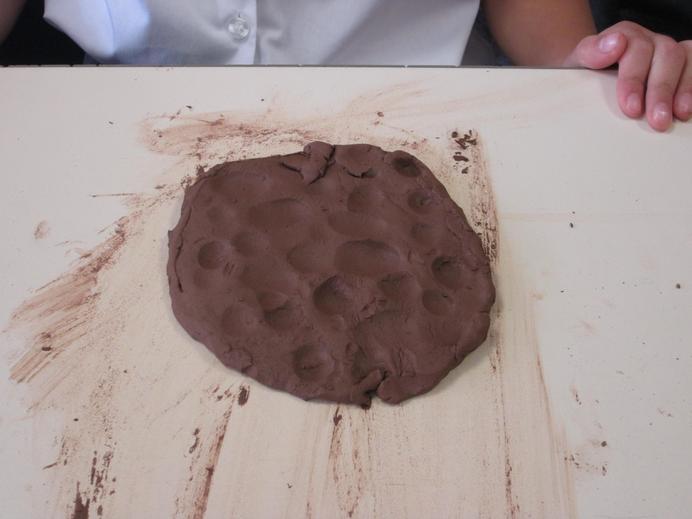